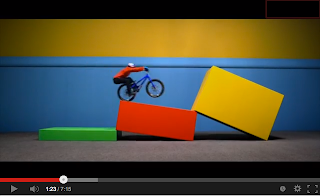 So if you are like me you spend a fair amount of time sitting behind a computer. For inspiration, brain relaxation or just plain boredom – you while a few minuets away gloriously engrossed in the wonders of YouTube and at the same time despair at the low rent movie craft.  Well Red Bull look to me like they have taken this bull by the horns. At last a grown up viral.

Does this quality and budget commitment on display here point to the eventual total fragmentation of terrestrial broadcast media? Who knows for now. But with the recent film feature of 'some girls' on vimeo on demand, and The America's Cup - streamed live to YouTube, as well as BT trying to spoil Sky's Sport party, all the signals suggest these guys are making a big play.

In the mean time, make a cuppa, put your feet up and watch something stunning.